Copyright infringement is an everyday situation for Minecraft modders. Most of the somewhat popular mods today have at some point been illegally copied and redistributed onto a third party site, without any acknowledgement or permission of their developers. Many of these websites are hosted in Vietnam or Russia, and are hard to take down due to different copyright legislation. Many of these sites illegally monetize their download links to earn money off of the modders' hard work, and several even go as far as to claim ownership of the illegal content. Some of them are known to host malware and viruses and claim that these are real, harmless mods. This has to stop.

When DMCAs and take-down notices fail, we have to rely on the community to stop people from downloading mods from these sources. However, many of the websites engaging in the type of activity outlined above look very well designed and official, confusing many players and making them believe that these sites are actually the real ones. As a result, many machines are infected with viruses and malware, modders lose revenue and reputation and are spammed with reports about bugs which have already been fixed in newer versions of their mods, since only the old versions are hosted on the illegal sites. Stop Mod Reposts is designed to stop this. Here's how we plan to do it:

This extension is developed by bilde2910, just another member of the modding community. The website StopModReposts.org is designed and developed by other members, so we're not directly affiliated with each other. The same goes for @StopModReposts on Twitter. If you have any reports or questions, feel free to tweet at @bilde2910, or send an e-mail to marius@varden.info. You can also look for bilde2910 in the #stopmodreposts channel on the EsperNet IRC network.

The sites this extension warns about are the same sites as are listed on https://github.com/VictiniX888/Illegal-Mod-Sites and is updated every few days or hours with new hosts. If you own one of these sites and want to be removed from the list, I suggest you have a chat with the people of the #stopmodreposts channel on EsperNet, they'll see if it's a good idea or not to have you removed. 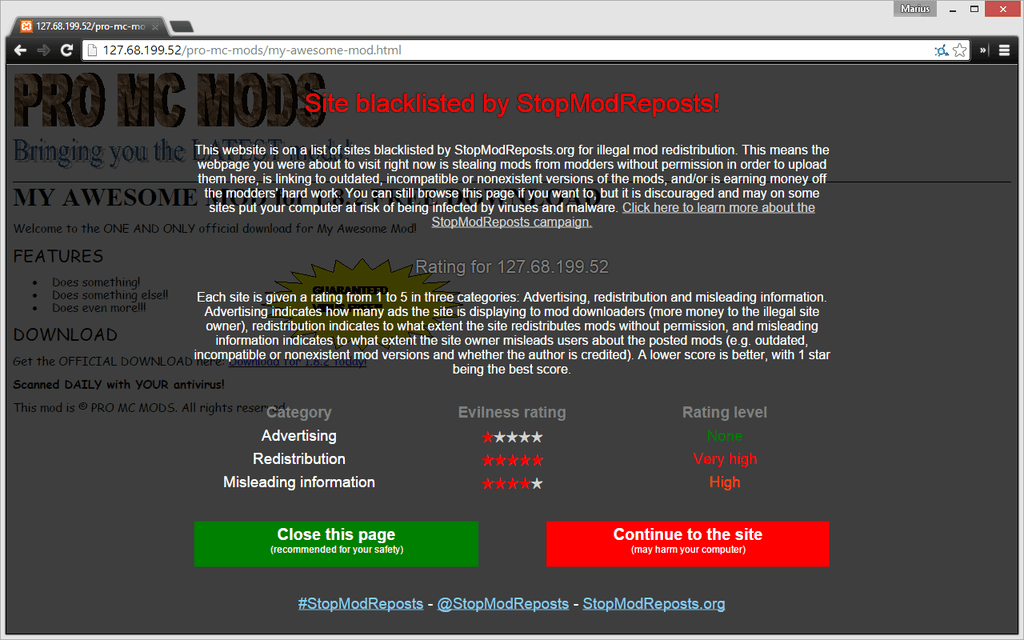