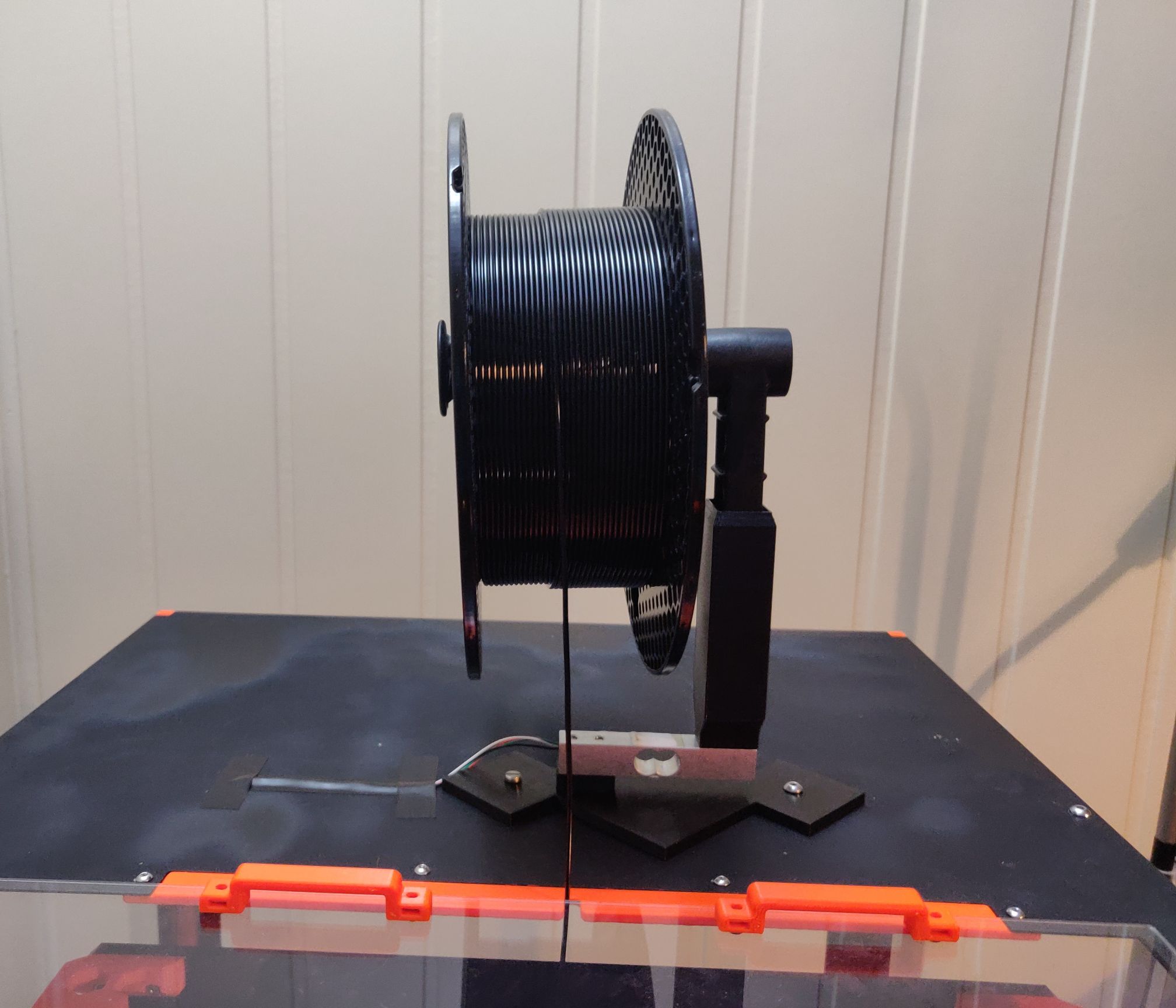 This design allows for mounting an HX711 and load sensor on top of the Prusa-box 3D printer enclosure. It replaces the top mount mod, and allows using the Filament Scale Enhanced plugin to measure the remaining amount of filament on the spool.

It's designed to use a minimal amount of soldering, and you can build it with no soldering at all if you can find an HX711 board that has the pin headers pre-soldered onto them. It uses an RJ45 8P8C connector to allow for modularity and ease of installation of the HX711 board in the box.

This guide assumes that you have already set up OctoPrint on a Raspberry Pi.

THE AUTHOR TAKES NO RESPONSIBILITY FOR ANY DAMAGES OR INJURY SUSTAINED TO YOU OR YOUR PRINTER, RASPBERRY PI OR OTHER HARDWARE. FOLLOW THESE INSTRUCTIONS AT YOUR OWN RISK AND RESPONSIBILITY.

The assembly guide is also available as a printable version here.

The load cell that this design is made for, is:

Many load cells are 80x12 mm, has other spacing, or uses different sized screws. You can buy them, but then you have to modify the SCAD file, because the provided STL will not work for you.

For the screws listed, you can also use longer screws within reason (e.g. you can use an M4x20 instead of M4x16, or M4x25 if you wish, but these are the recommended sizes and the ones I used).

I used 60% infill for the base and holder, and 100% for the parts that contact with the load cell directly. The HX711 mount doesn't need high infill. I personally used 30% because that's what the Prusa-box team recommends for most of their parts. Supports are not needed for any of the parts.

G-code for Prusa i3 MK3S+ with Prusament PETG is bundled with the download.

Saw off, melt away, or by any other appropriate method remove the clip part of the original Prusa filament spool holder. See below reference picture:

I used Dupont wires in the following colors. You may use other colors, as long as you keep track of the colors used, because the ones below are used consistently throughout this document.

Cut all eight Dupont wires in half at the middle. You will use one half of each cable in this step. Keep the other halves of the brown and blue cables for later.

Using the LSA/Krone tool, terminate the following colors of Dupont wire, leaving as much spare wire as possible on the connector end of each wire.

After terminating it, mount the keystone in the HX711Mount.stl printed file.

If the HX711 board you bought does not have the header pins soldered on yet, you should solder them on now, so you have somewhere to connect the Dupont wires to the HX711 board. Proceed when done.

Place the two M3 nuts in the clamp bridge (the small part from HX711Mount.stl). Screw in one screw from the underside of the mounting plate, through one of the nuts, with the nut facing up and away from the base plate. Slide the HX711 board in underneath the clamp, and insert the other screws. Very carefully tighten the screws so the HX711 board is held in place. Do not over-tighten the screws or you will break your HX711 board! Refer to the pictures below to see how the board is mounted.

Connect the Dupont wires from the keystone jack to the HX711 board in this configuration: 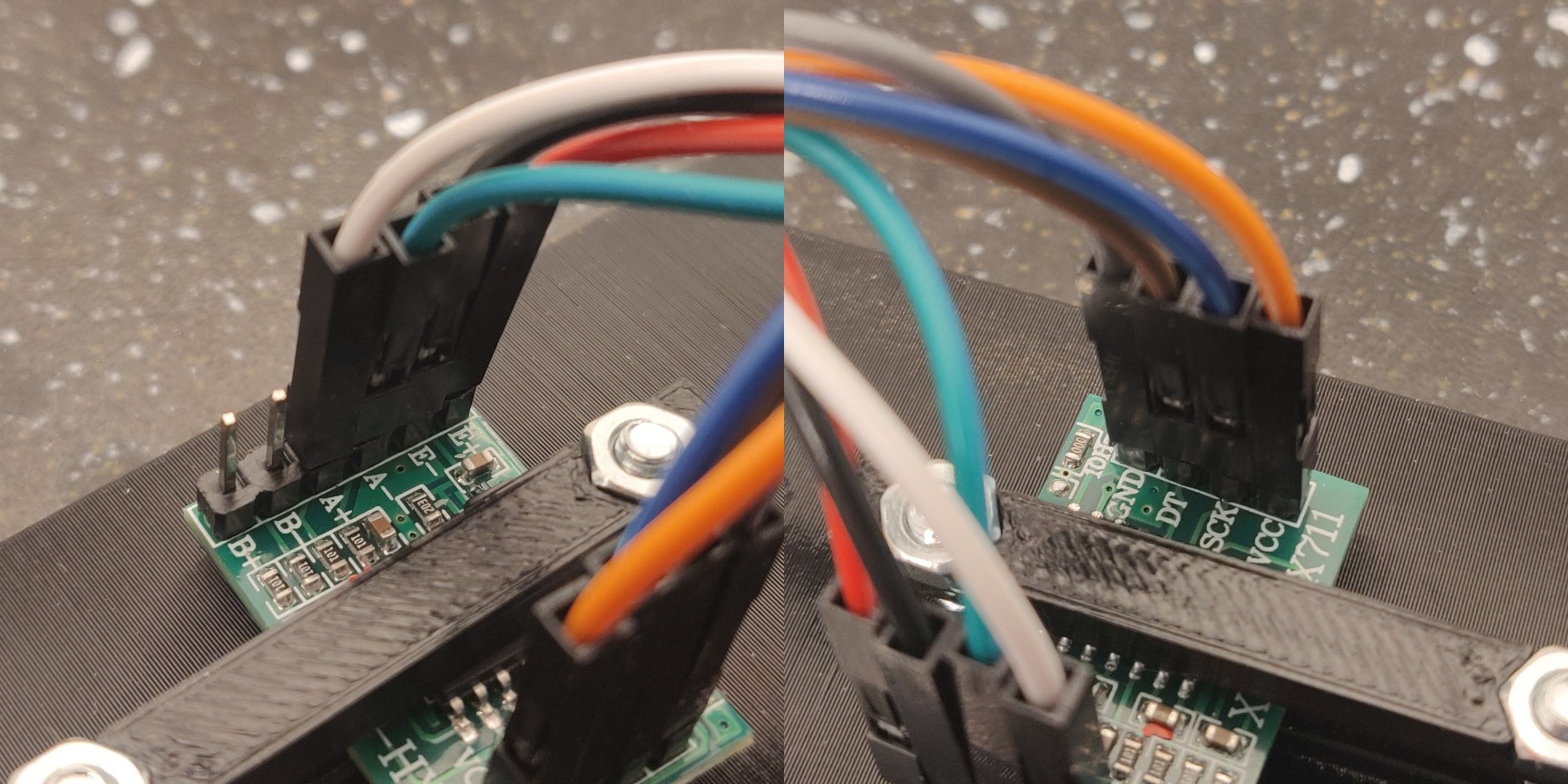 Use a zip tie to bundle the cables neatly together. The finished plate should look like this:

After the spool holder is securely mounted, attach the load cell to the base plate using two M4x20 screws. These screws are inserted from the underside of the plate.

While facing the front of the printer enclosure, mount the base plate to the top of the box on the middle and adjacent right screw holes through the cross beam in the printer box. See picture below for illustration. Use an M4x16 screw for the middle (left) hole, and an M4x10 screw for the right one. These screws are inserted from the top of the plate, and are screwed down through the roof of the print enclosure.

The right/short screw should be secured with an M4 nut directly on the underside of the printer box roof. The left/long screw should be screwed through the HX711 mounting part, in between the cross beam in the roof of the enclosure. There is an M4 nut slot in the HX711 mounting plate - it does not retain the nut on its own, so you'll have to hold it in place while you put the screw through it from above.

Note: Make sure that when you mount the HX711 mounting plate in the cross beam on the underside of the enclosure roof, that the keystone faces left!

Lastly, guide the four wires from the HX711 cell through the cross beam hole to the left of the spool holder on the top of the enclosure. Cover these wires with some PVC tape.

If there is exposed wiring at the end of the load cell wires, cut these off so that there is no exposed wire. The insulation will be crimped through when you crimp the RJ45 connector.

Crimp the RJ45 connector with cables in this order, from left to right, with the clip facing down: 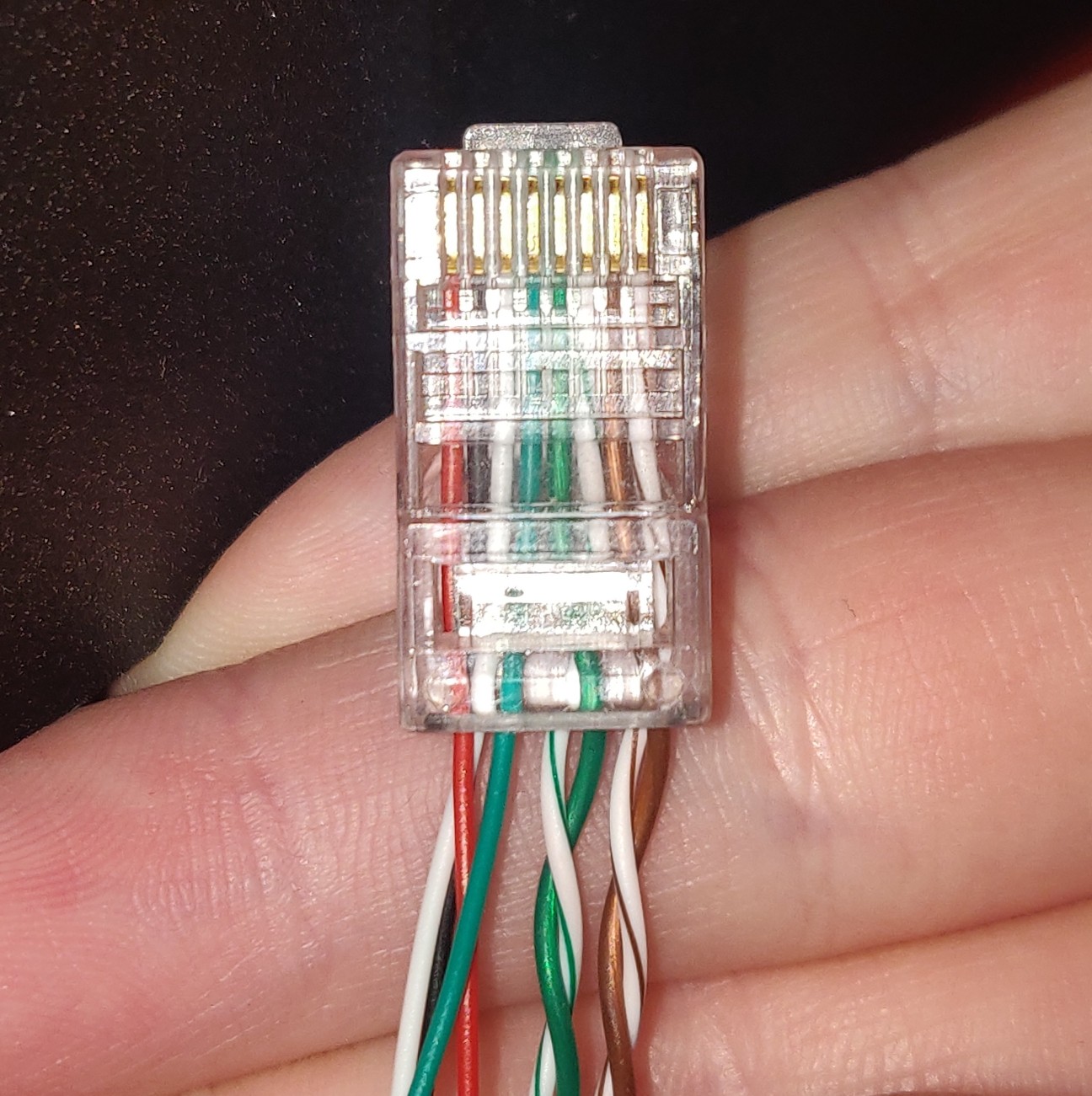 Connect the crimped RJ45 connector to the keystone that is connected to the HX711 board. 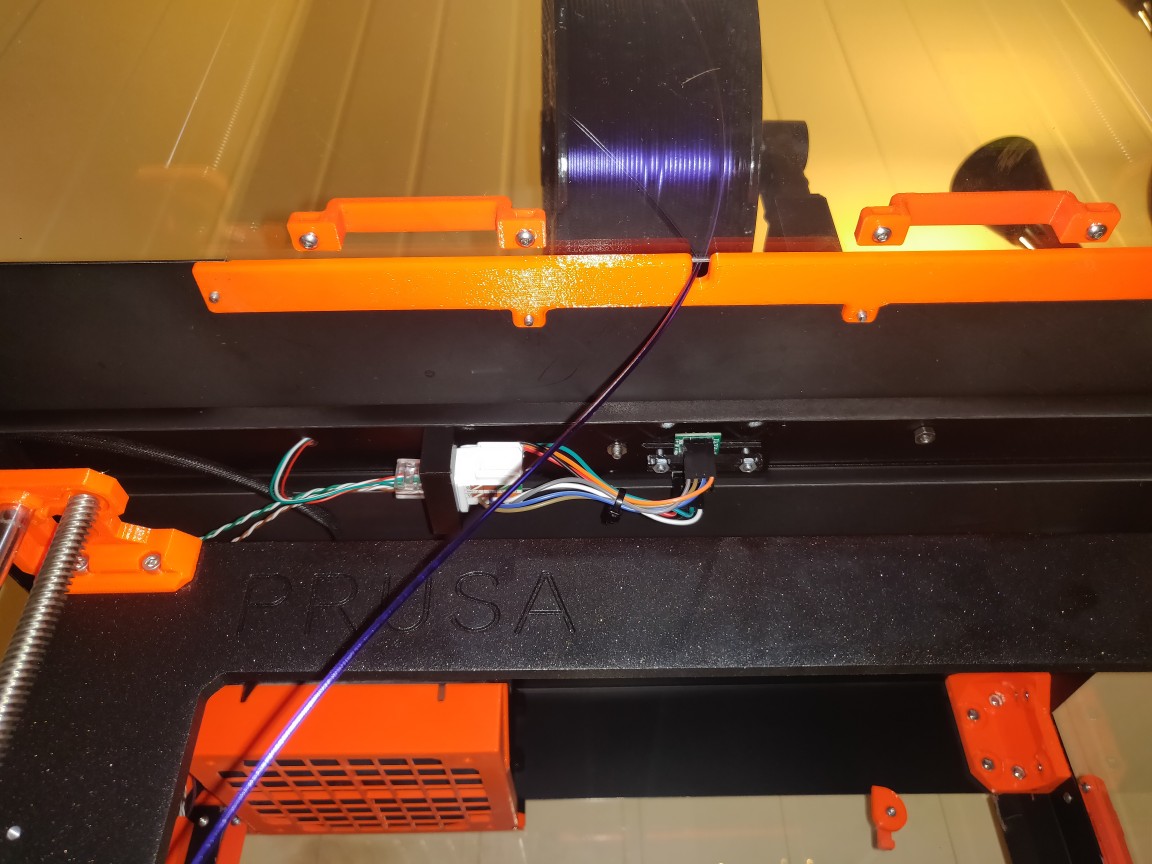 Route the two twisted wire pairs down behind the vertical cable management cover in the back corner of your printer enclosure. The green wire pair should be directed into the enclosure's power supply box and connected to the 5V screw terminals of the 12V-5V buck converter (the one that the USB cable from your Pi is connected to). Cut off the excess wire from this green wire pair and strip off about 5 mm of insulation from the ends. Twist the copper strands, the insert the wires as follows:

Route the brown twisted wire pair behind the cable management covers and over to your Raspberry Pi. Ensure that the twisted pair wires can reach all the way to the GPIO headers of the Pi. Cut off any excess wire if you like.

Use the two Scotchlok connectors and insert the following wires into them:

When two wires are inserted into one of the Scotchlok connectors, you can terminate it using pliers. 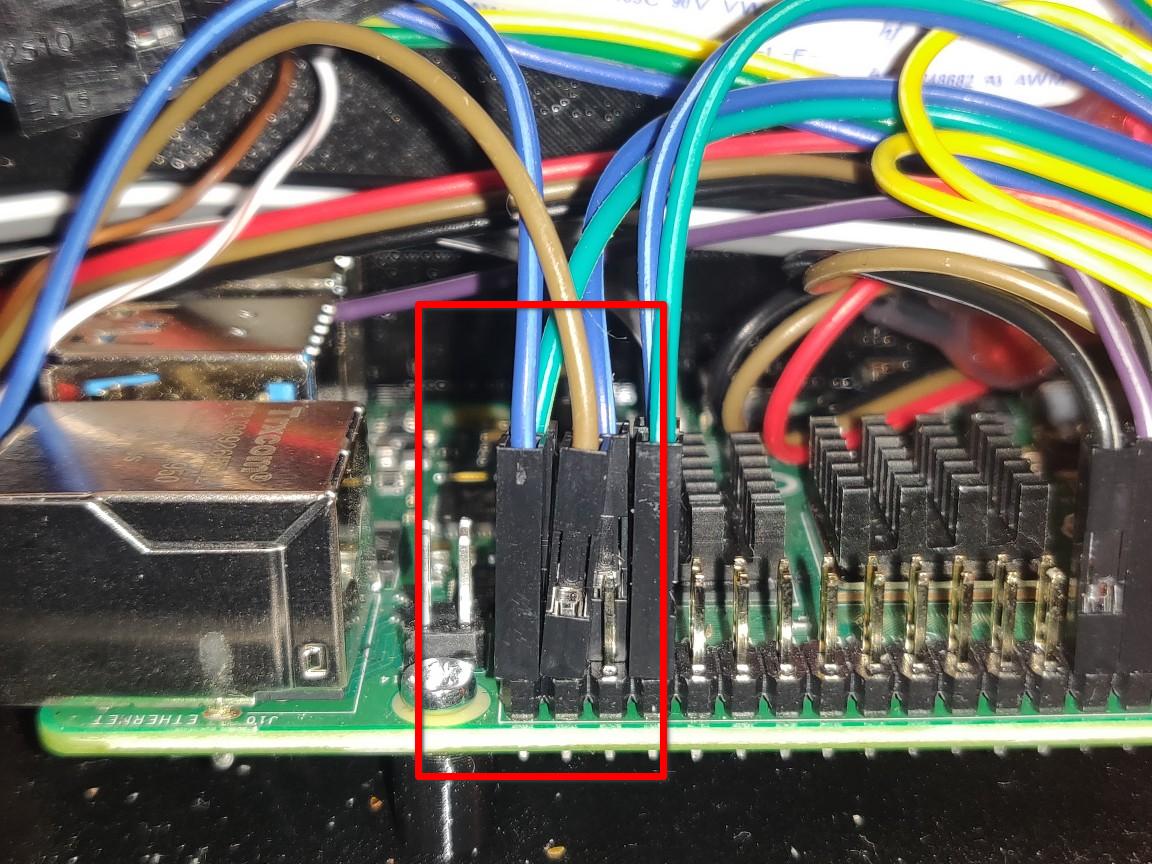 Finally, enter the weight of an empty spool. For Prusament spools, this is 193 grams. Yours may vary depending on which manufacturer of filament you usually use.